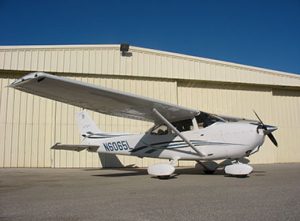 The Cessna Skyhawk or 172 is the industry standard for professional flight training. With more than 43,000 172’s delivered, the Skyhawk is the best-selling, most-flown airplane EVER. The proven reliability, forgiving flight characteristics, and its reputation as the safest general aviation aircraft ever built makes it an amazing trainer and personal aircraft. The Skyhawk is the worldwide leader for flight training and more pilots have launched their dreams in it than in any other aircraft.

The 172 continues to be one of the most advanced single-engine training aircraft on the market. Equipped with an efficient fuel-injected 180 horsepower engine that provides a cruise speed of about 120 kts while burning as little as 10 gallons of fuel per hour. With seating for up to four people, ample baggage space and a maximum range of about 400-500 miles, the 172 is a great cross-country aircraft.

All of our Skyhawk 172’s are 2006 year model or newer and feature the following options: