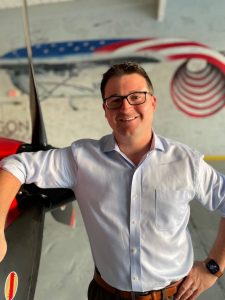 Christopher Schoensee is the president and co-owner of Paragon Flight Training, located on Page Field in Fort Myers, Florida. Under Chris’ direction, Paragon Flight has become a national leader in ab initio flight training, with a stellar safety record and accreditation from the FAA and SEVIS. Paragon Flight trains not only commercial pilots and students in collegiate aviation programs, but also offers military pilot training services for domestic and foreign governments, with a specialization in Cessna fixed wing piston aircraft training.

The company was named to the 2021 class of GrowFL 50 Companies to Watch and also received recognition by The Aircraft Owners and Pilots Association (AOPA)’s 2021-22 Flight Training Experience Awards as a Distinguished Flight School, a title given to the highest rated flight schools from the 2021-22 Flight Training Experience Survey. Since 2012, Paragon Flight has been recognized more than 26 different times by AOPA for education excellence and exceptional customer service.

With a growth mindset, Chris is a keen observer of the opportunities in the flight training industry. In February 2022, he announced plans for Paragon Flight to purchase 10 Piper aircraft as part of the five-year fleet modernization component of the company’s long-term strategic plan, which includes the purchase of an additional 40-50 Piper aircraft over the next five years. Through Chris’ guidance, Paragon Flight entered into a long-term agreement in 2021 with Lee County Port Authority allowing Paragon to implement a multi-phased strategic growth plan, tripling fleet operations and expanding their training and technology services at Page Field. Launched in 2020 to accommodate the increased demand for his company’s services and to address the nation’s commercial pilot shortage, the project includes the construction of a 14,000-square-foot maintenance and MRO facility that was completed 2021, as well as an 8,000-square-foot pilot development learning center, slated for completion in 2022.

A native of Michigan, Chris began his career in the industrial automation field, starting as a repair technician before moving on to positions with increased responsibility, including regional sales manager and vice president of operations. Naturally mechanically inclined, Chris studied industrial technology and fluid power controls at Macomb County Community College in Warren, Michigan. Chris has a passion for aircraft and received his flight training certification through Paragon Flight in 2009, prior to acquiring the company.