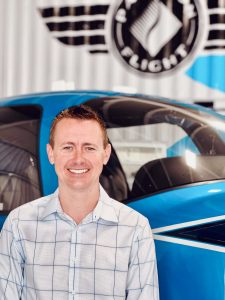 In a nod to his skill as chief flight instructor, Jeff was awarded the coveted Excellence in Pilot Training honor by the National Air Transportation Association in 2022. Paragon Flight also received recognition by The Aircraft Owners and Pilots Association (AOPA)’s 2021-22 Flight Training Experience Awards as a Distinguished Flight School, a title given to the highest rated flight schools from the 2021-22 Flight Training Experience Survey.

With a lifelong passion for aviation, Jeff started his flight training at Page Field when he was 16 and received his private pilot certificate at age 18, prior to attending Jacksonville University.

Jeff was very involved in the aviation program at Jacksonville University, where the school’s training was contracted through the Delta Connection Academy. While a student, he was hired by the Academy as a flight instructor, training both private and instrument students. After receiving his Bachelor of Science degree in Aviation Management and Flight Operations in 2007, Jeff was hired by Comair, a Delta Connection Carrier, as a first officer flying a regional jet.

Active in the aviation community, Jeff is a member of the Aircraft Owners and Pilots Association (AOPA) Flight Training Advisory Board and Jacksonville University’s Aviation Advisory Board.